On 1 July 2016, changes to the label requirements of Australian food were made under section 134 of the Australian Consumer Law (ACL), which introduced the Country of Origin Food Labelling Information Standard 2016 (Standard). Businesses had two years to comply with the new labelling Standard before the changes became mandatory on 1 July 2018.

Products grown, produced or made in Australia now require labels to contain: 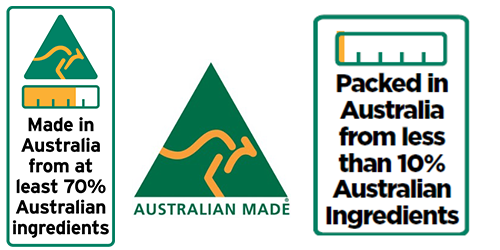 Foods merely packed in Australia cannot feature the kangaroo in a triangle logo, and any food grown, produced, made, or packaged in a country other than Australia must specify the country of origin on the label. In most instances, these products will be required to carry a label featuring a bar chart and explanatory text, stating that the food was packaged in Australia and the proportion of Australian ingredients.

Importantly, the well-known Australian Made logo is no longer able to be used on any food products sold in Australia.

Food packaged and labelled from 1 July 2018 must follow rules as set out in the Standard.

From 1 July 2018, the changes became mandatory and any failure to comply is likely to contravene the ACL, which may lead to enforcement action by the Australian Competition and Consumer Commission (ACCC). Failure to adhere to the Standard may constitute misleading or deceptive conduct (section 18 ACL), or false or misleading representations about goods or services (sections 29 and 151 ACL).

The maximum financial penalty for a breach of the ACL is $1.1 million for a corporation, or $220,000 for an individual. A court may also make compensatory orders, corrective advertising orders or impose injunctions for any breaches. The ACCC is also likely to use the infringement notice mechanisms under the ACL as a means of enforcing the new laws. An infringement notice can be issued by the ACCC where it has reasonable grounds to believe a party has contravened certain consumer protection provisions of the ACL.

The penalties will vary on a case by case basis but for most contraventions are:

It is also an offence under the ACL for a person to supply goods that do not comply with the Standard.

In addition, any breach of the ACL which has resulted in loss or damage to a third party may also result in that third party taking action.

Verification of identity: a refresher